I walked out to my garden to see the growth and to check on three killdeer eggs nestled near the beans. I was surprised to see one speckled egg heaving from the chick now partially visible inside it. A second egg had a tiny hole pecked through it and the chick inside that one moved the egg with its machine-gun breathing. The third egg still looked like a speckled rock, still and silent.

I sat quietly watching the eggs in the early light. I wondered if all three would survive the weather, predators, hunger and thirst. But my day was beginning too so I couldn't sit long to see how it would all play out.

By late morning all three chicks had hatched and nestled close to each other, their already formed gray feathers covering their bodies. The parents squawked and faked injuries nearby to distract any predators from getting closer.

By late afternoon, one chick remained in the circle of pebbles that made up the shallow nest. I wondered what became of the other two, worried about the pending storm on the horizon and felt the wind grow colder.

As the lightning and thunder joined heavy rains in early evening, the fate of the chicks was in the balance. Would they drown? Would they get lost in the dark?

I peered out my kitchen window the next day, preparing to make blueberry pancakes and ticking off the items on my to-do list. I had already walked to the garden and didn't find a single chick...only the two killdeer parents wandering around aimlessly. Perhaps that is how life works, I thought. One minute you're here and living and breathing and the next you disappear.  What is the point of life, then, if it's so brief and without purpose? Maybe it's because my birthday is this week, but everything felt a bit futile.

King Solomon said that all is vanity. He was the wisest human leader in the Bible, but at the end of his life he only found futility in his riches and power. He encouraged people to eat, drink and be merry with family and friends, to guard their hearts against sin, to work hard and stay focused. Because in the end the works of this world are worthless except the development of our character and wisdom. All earthly things come to rust and ruin...including us.

While the fools of the Bible focused only on pleasure and achievement, Solomon advised us to serve others to the best of our ability, enjoy the simple things and honor one another with our lives...however brief. We see examples of infants who inspire great works by their families even though their lives lasted minutes or hours. We also see examples of elderly teachers who continue to learn, grow and serve to the end. A speaker at a women's luncheon recently related the story of her dying mother who wrote cards of faithful encouragement to two people who needed a good word; these people received the cards the day of her mother's funeral.

Still gazing out my window, I saw something fascinating in my neighbor's yard. Three little specks darted back and forth in the grass. The killdeer parents flew around wildly, chasing off any curious wildlife. The chicks survived. And with God's grace we like them will rise to the opportunity of wild and precious life every moment we have to live it. 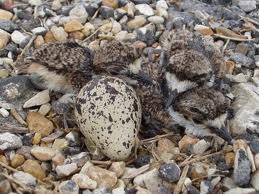 May God bless you and remind you of today's simple gifts.
Posted by — The Patient Parent at 9:56 AM 2 comments: