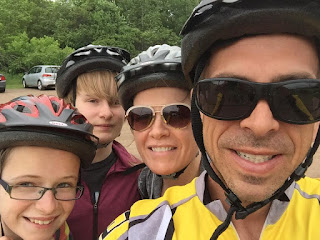 In less than 36 hours, my husband will be born. He came into the world on June 14, 1970, about 2 a.m., the last of four children for Donna Ruth Fredrickson Nelson. About 36 hours prior to that, in the same hospital in Litchfield, Minnesota, a girl baby was born — the first of four children. That was me.

Andrew Eric Nelson and Christine Marie Hierlmaier crossed paths in a hospital nursery, in kindergarten, in a middle school choir room, in track and in marching band before they ever considered each other beyond classmates. There was no love at first sight. There was mainly the chaos of two very determined, stubborn and emotionally challenged teens trying to balance identity with someone else’s existence.

After several stops and starts along the way, these kids decided that a life together was better than one lived apart. They simply had no idea what they were in for or what they might put each other through over the next 22 years. Many situations, attitudes and choices threatened to separate them. Just the challenges of child-rearing, moving and money were formidable threats. Each of us wanted our way. Each of us brought baggage from our childhoods. Each of us was trying to do the best we knew how.

And when we finally began to see each other as not perfect for each other, not perfect really for anyone, that’s when it clicked. That is when the turning away began turning toward. That is when pride and shame and greed and ego transformed to something softer inside. That softer something left me today with only a big blue sky and a pathway where up ahead my family rode together.

I don’t know how many more birthdays I will get to enjoy. But I do know that today was worth all the chaos. Today my soul reached back to 2 a.m. on June 14, 1970, and said, “Thank you for this gift.”

Posted by — The Patient Parent at 7:52 PM No comments: