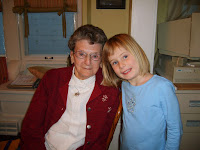 My grandmother Mabel Dougherty died this morning after a long and beautiful
life.

She was a WWII bride who raised her first son alone for two years while my Grandpa Jack was a German prisoner of war. She then raised six children on a dairy farm in Litchfield, Minnesota. She fought cancer almost to the death in her 50s and survived.

She faced widowhood too soon when Jack died of lung cancer at age 62. She never remarried.

She left the family farm, which she and Jack never owned, and faced an auction of many of her things before moving to a mobile home. Then she moved to assisted living in town. Then she moved to a nursing home. Each time, her possessions decreased. But her talent for an orderly home never did.

Her talents ranged from baking to quilting to horseback riding. I once watched her butcher a dozen chickens in quick succession with the swing of an ax. I also remember strawberry picking and afternoons of bringing lunch to Grandpa and the farmhands in the field. Mabel was a hardworking farm wife who expected a lot from her children as much as she expected help from God. She was a converted Methodist and devoted Catholic who believed in the power of prayer. Her rosary is lovingly worn.

She did the best she could with a large family and the pressures that came with it. Perhaps some could have done better than she in the same situation, and I suspect some worse. But I'll remember her for her home cooking, hugs, her sense of humor and her ability to find faith when life didn't always prove fair or right. She was a sharp dresser and a beautiful lady inside and out. She loved red shoes and dancing.

She used to tell me the story of how she and Jack first met. He came with another gal to a dance. But he left with Grandma! His letters to her during the war are filled with devotion and hope for a grand future.

She made my childhood a dream and her death, though expected, makes me realize the importance of not wasting a single day. Why, when life is at an end, would we ever regret a moment of happiness or begrudge it for another? Why would we fail to forgive or pray for healing? Can't we live every day in that state of compassionate, dying grace? It's available to everyone who believes. We don't have to wait for death to find it.

God bless you, angel Mabel. You quietly slipped away when your children weren't looking. You are watching out for all of us now with your beloved Irish love. I hope his hair is as fiery red as your dancing shoes and that you're sharing a Snickers bar in a field of peonies.